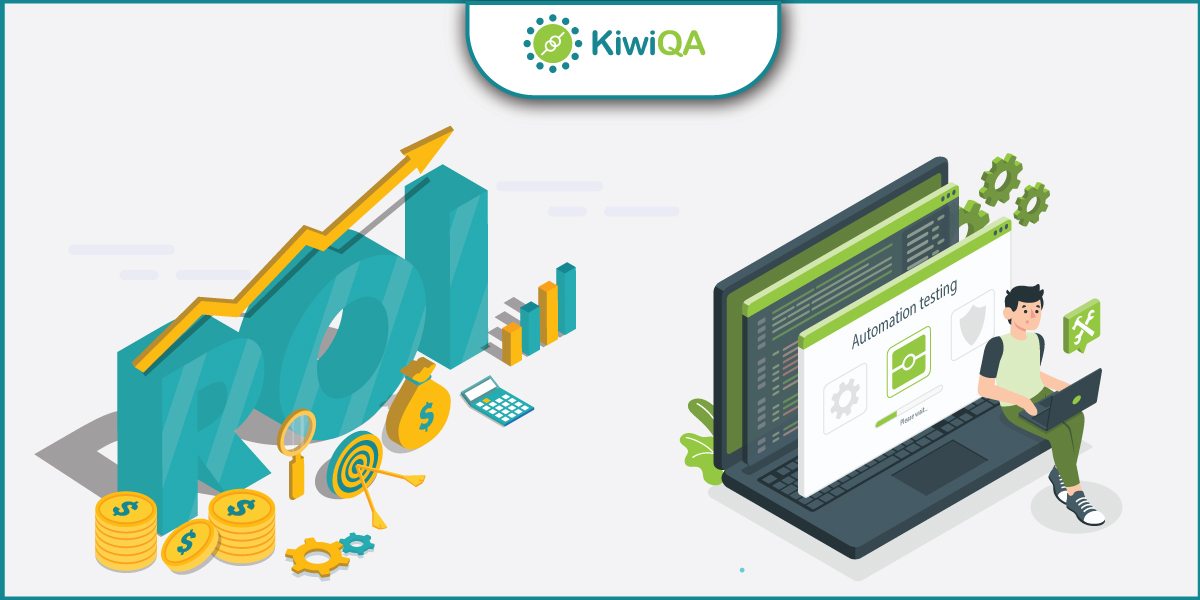 Needless to mention that enterprises should have a few KPIs (Key Performance Indicators) to keep a timely check on the ROI of automation testing. Some of the KPIs like savings in man hours, faster execution cycles, etc. cannot be measured in monetary terms but they definitely expedite the time to market.

As seen in the above formula, savings can bring direct $ benefits or it could result in time savings (or resource savings). Whether tests are performed on a local testing infrastructure or cloud-based testing infrastructure, it still results in an expenditure (or Cost to Company). These expenses can be categorized as ‘Investments’ that are expected to yield results on a short-term and long-term basis.

A positive ROI is considered if an investment in a faster test infrastructure results in enormous time savings, thereby resulting in a faster product delivery. Test Flakiness and False Positives are not new in the world of automation testing! Though tests written with modern test automation frameworks like Cypress are less flaky, you still need a scalable, reliable, and secure infrastructure to run Cypress tests at scale!

On the whole; factors like test flakiness, false positives, test re-runs (due to infrastructure or test suite issues), etc. can delay the goal of attaining positive ROI (or break even) with automation testing.

Now that we have looked into the formula for calculating ROI in test automation and factors that impact the ROI; let’s deep dive into the key KPIs that can be used to measure the ROI.

The three major parameters that must be considered when measuring ROI in test automation are:

A number of factors like test automation framework, test infrastructure, test suite (or test bed) design, etc. have a direct impact on the overall outcome of web automation testing. The tricky part about the returns on automation testing is that a majority of the monetary returns (or benefits) are not evident straightaway.

The intangible benefits (e.g. savings of critical man hours, savings on recursive investments on in-house infrastructure, etc.) directly results in huge cost savings. A majority of these cost savings can be observed after investing (or building) in a reliable, secure, and scalable test infrastructure.

Consider an example where an enterprise has a team of QA engineers scattered across different geographies. In such a scenario, investing in a local in-house infrastructure results in recursive investments since the infrastructure will need constant maintenance and upgradation. This is where migration of automation tests to a cloud can result in huge savings on multiple fronts like time, cost, and more.

Infra costs is the major chunk of investment in automation testing and a correct decision on that front can lead to huge savings with automation tests in the long run!

Machines can never lie 🙂 It is this fact that also increases the trust in test automation. Test Coverage is one of the biggest indicators of the quality of test automation scripts. Higher the test coverage, better is the probability of catching bugs (or improving the overall product quality).

This is the reason why effort should be put in aligning the test automation with the best-suited type of testing. Automation testing when coupled with meaningful integrations like product management tools, bug tracking tools, CI/CD tools, etc.; helps in expediting the process of bug discovery, issue tracking, and issue closure.

All these factors are instrumental in building a better quality product. Enterprises looking to leverage automation testing can consider execution speeds, test reporting, and other such factors in the automation ROI calculation matrix. Though some of the mentioned factors do not result in direct monetary benefits, they do result in huge time savings – a factor that impacts the overall timeline of product delivery.

It is a known fact that automated tests are more accurate than manually executed tests. Apart from high accuracy, automated tests can be executed at a much faster pace when compared to manual tests.

Keeping these pointers aside, the time incurred in running rigorous test cycles can result in recurring time savings. Automation testing on a scalable and reliable test infrastructure can be leveraged to run:

Integration with CI/CD tools helps in making the most out of automation testing and continuous testing! The result is faster product readiness and top-notch product quality.

To summarize, factors like test infrastructure costs, time savings & cost savings (due to automated testing), and overall impact on CAPEX (Capital Expenditure) & OPEX (Operating Expense) should be considered when deriving the long-term impact (or ROI) of test automation.

There is no magic wand to reap the benefits of automation testing, since the overall testing strategy depends on a number of factors – some of which can be controlled by choosing the right test automation provider. Partnering with a proven global QA vendor like KiwiQA that provides test automation services can prove useful in faster execution of your test automation strategy.

Lastly, achieving a break even in test automation requires patience! Eventually, enterprises with the best test automation approach have a higher likelihood of attaining positive ROI.