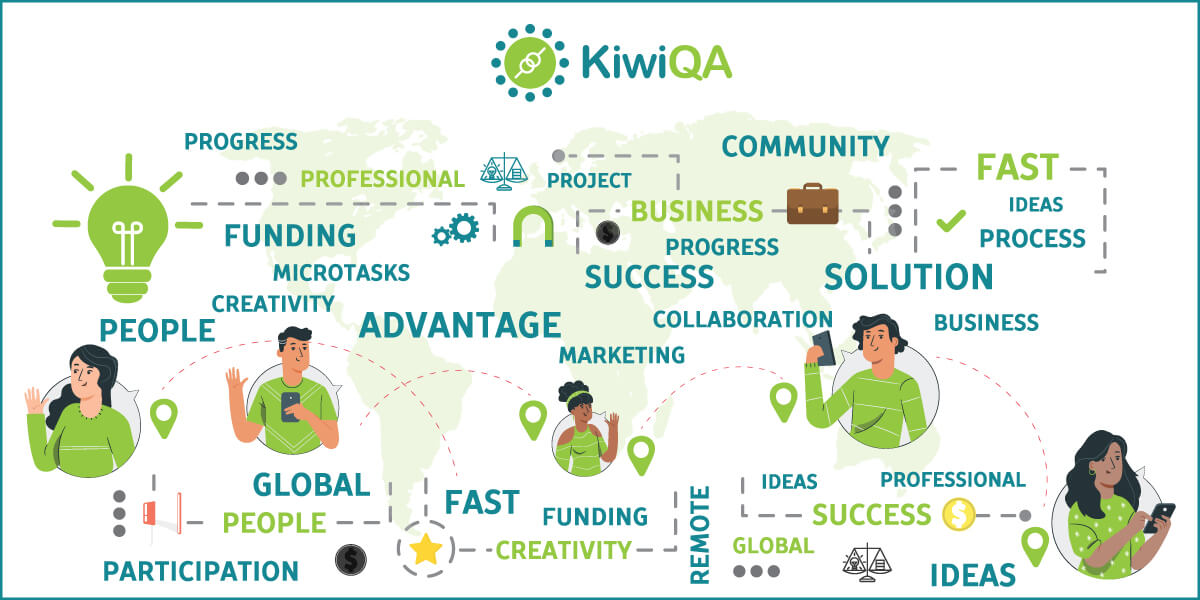 Software enterprises across different business segments are embracing lean principles across various business functions. This also includes the QA discipline where ample opportunities exist to leverage the skills of resources in hand.

Organizations are already resorting to outsourced software testing since it results in significant cost savings while ensuring that the testing activity is executed without any hurdles. Crowd testing is one of the growing trends that has picked up pace as it provides an opportunity to leverage the skills of the global testing community.

Is there a magic wand to get started with crowd testing? Definitely not! However, it is essential for organizations to understand where crowd testing fits in the big scheme of things.

Understanding the advantages offered by crowd testing over in-house testing can act as a good starting point to crowd testing.

What is Crowd Testing?

Crowd testing (or crowd sourced testing) is an emerging trend where the potential of the global testing community is harnessed for testing of a software product. Crowd testers who sign up for the product (or feature) testing belong to different segments, thereby enabling the enterprise to have the features (or product) tested on different browsers, devices, and more.

The testers who sign up for the testing activity rigorously test the features along with submitting the potential areas of improvement.

Here are the major benefits offered by crowd testing over in-house testing and outsourced software testing (to a certain extent):

Shipping a quality product under tight timelines means that enough time needs to be invested in the testing of the product. However, this is easier said than done!

Thorough testing at a massive scale can only be achieved by putting more resources on the testing front. Crowd testing helps realize this scale, as crowd sourced testers (in large numbers) can participate in the making of a high-quality product.

Enterprises should explore crowd testing services irrespective of the size or scale of the product. The major plus point is that it helps in improving the product quality at a faster pace.

Cost savings is one of the major benefits offered by crowd testing. It reduces the dependency on the in-house testing team, which can be better utilized in testing other aspects of the product.

Such a kind of parallelism in feature (and product) testing is majorly possible with crowd testing. On the whole, crowd testing is a much more effective testing strategy in comparison to in-house testing.

Crowd testing lets enterprises achieve better test coverage as tests are performed on a wide range of platforms & devices. This helps in unearthing bugs that might have been difficult to figure out with traditional testing mechanisms.

The volume obtained through crowd testing helps in expediting the product release cycle. Since the tests are performed at different loads, it also helps in improving the website’s (or web app’s) performance.

A major percentage of crowd testers have a good amount of domain and usability experience. Since crowd testers are passionate about their subject, they take extra effort to find bugs in the product.

To top it all, many crowd testers are working professionals who intend to utilize their experience in locating bugs (from an end-user’s perspective). Rather than getting lost in the crowd of crowd testers listed on different online platforms, it makes business sense to partner with a crowd testing company that has access to top crowd testers in the community.

In many enterprises, all the employees including the internal QA team might be overloaded with a lot of work. Long working hours and tight delivery timelines might lead to a creative roadblock on their thought process.

This is where a company like KiwiQA that offers a plethora of crowd testing services can be instrumental in improving the quality of the web products developed by its clients. Since the company has immense experience in the testing field (including crowd testing), it can help the clients in performing tests at scale.

Crowd testing is one of the prominent emerging trends when it comes to testing web products on a massive scale. Testers who are a part of the testing assignment perform tests on real devices and different user environments. Enterprises can achieve top-quality results by opting for crowd testing over internal testing. In fact, the combination of crowd testing and internal testing works like a charm for the verification of functionalities in web products.

Rather than choosing a random crowd testing platform, it is recommended to partner with a crowd testing company like KiwiQA that has immense experience & expertise in the field of code verification & testing.