Why Automation Testing and DevOps Go Hand In Hand? 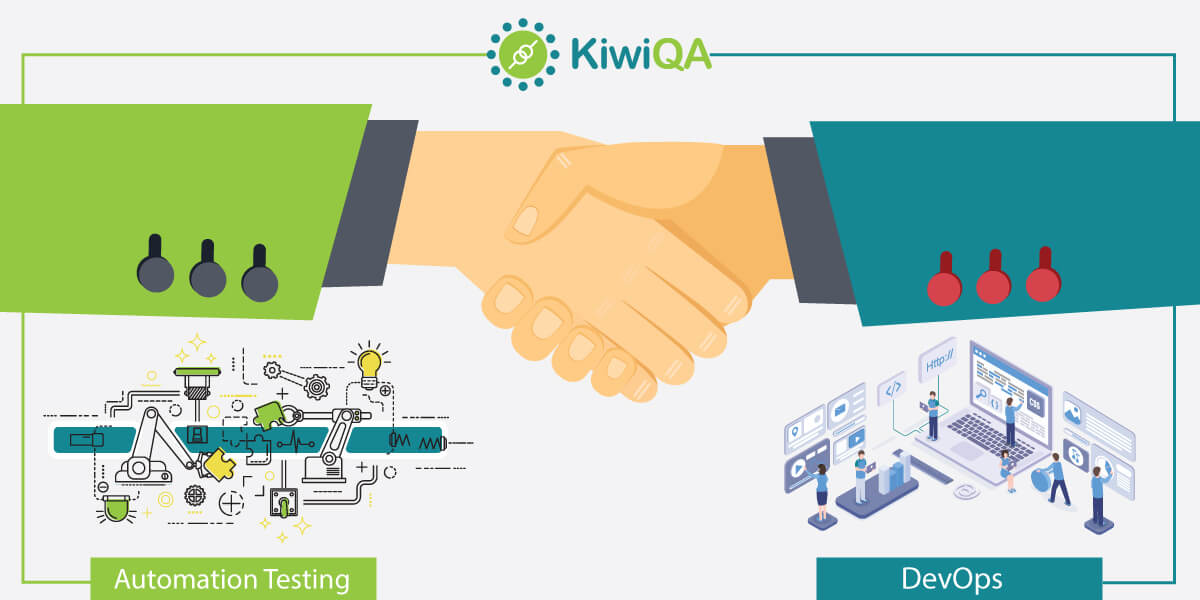 There is no doubt that we are living in a fast-paced world. Businesses might lose golden opportunities if the product does not reach the consumers (or customers) at the right time. Enterprises need to act fast on the genuine feedback shared by their customers else their competitors might edge past them.

Though automation testing is an integral part of the software release cycle, enterprises can achieve much more by incorporating Continuous Integration (CI) and Continuous Deployment (CD) in the process. Having a fool-proof DevOps strategy is an absolute must for Agile-driven enterprises. It’s no surprise that Agile and DevOps are software testing trends for 2021.

In this blog, we take a deep dive into why the combination of automation testing and DevOps can do wonders for software enterprises of today.

As the name indicates, DevOps is a combination of Development and Operations. It encompasses a set of practices that shortens the software release cycles by providing continuous software delivery with exceptional quality.

A majority of the aspects of DevOps are built on the backbone of the Agile methodology. With the incorporation of DevOps, software enterprises can deliver high-quality products and services at an accelerated pace.

Incorporating feedback from the consumers plays an integral part in the betterment of the product. However, rolling out product updates at frequent intervals is a task that is easier said than done. Complexities arise because the updates have to be tested across different devices, platforms, target geographies, and more.

Speed to roll out product updates can only be achieved by ensuring that the process of development, testing, and deployment are executed in a glitch-free manner. The changes pushed by the development team need to go through a rigorous QA pipeline.

Manual testing will not suffice to achieve these tasks, as it cannot cope with the Agile demands. It is not only prone to human errors but will also elongate the release to market. This is where a rock-solid automation testing strategy should be followed with a strong DevOps approach to fix issues at a rapid pace.

Test automation services from experienced service providers like KiwiQA should be used to the fullest potential to make the most of DevOps and Automation Testing.

There are several benefits of using automation testing for web products, with testing at scale and reliable test execution topping the list. It is safe to mention that the age-old waterfall model is no longer relevant in today’s fast-paced world. You have limited time in your hands to retain customers (or consumers) since they would ideally have other product options at their disposal.

This is where Agile methodology fits the big scheme of things since it takes into account Continuous Development, Continuous Integration, and Continuous Deployment (CD). The changes pushed by the developers go through rigorous cycles of build, test, and release (or feedback) before making it to the release stage.

As the product changes are tested at every stage, the speed at which tests are performed should match up the pace. This is where automation testing can do wonders to the DevOps teams since it accelerates the testing speed, thereby minimizing the time taken to circle back the feedback to the development (or product) teams.

Now that we have covered the aspects related to Agile and Automation Testing, let’s look at why automation testing for DevOps:

As mentioned earlier, manual testing not only elongates the testing cycles but is also prone to human errors. Consistency in the test results is essential to reap the benefits offered by DevOps.

Consistency in the QA results means that the software changes work on the expected lines when tested against different input combinations. This consistency should be observed throughout the delivery pipeline. Test automation is the only way to validate the software across different inputs at various stages and curtail the chances of human errors (which is highly prevalent in manual testing).

Communication gap between teams associated with product development & testing is one of the concerning reasons for delayed product releases.

DevOps with test automation eliminates this gap between teams and helps build a better product-driven organization.

The major advantage of automation tests is the potential to write test scripts for automating simple as well as complicated test scenarios. For example, a test automation framework like Selenium lets you write automation test scripts in various languages like Python, C#, Java, JavaScript, PHP, etc.

Almost all test automation frameworks support parallel test execution – a feature that lets QA engineers test features against a range of test combinations. These test scripts can be used for testing product features that make way to the QA delivery pipeline.

Stable product release means better product quality which directly equates to a good customer (or consumer) experience. Leveraging the potential offered by test automation in different stages of the DevOps pipeline helps in the continual improvement of product quality.

As only thoroughly tested changes make it to the Prod server, the failure rates of the new product releases reduce by a massive extent. This can only be achieved when test automation is a part of the QA pipeline.

Automation testing encompasses different types of testing: cross-browser testing, load testing, spike testing, regression testing, and more. Though the type of testing being harnessed squarely depends on the product type, the intent should be performing the desired tests at scale.

Almost all test automation tools can be integrated with popular CI/CD tools such as Jenkins, TeamCity, Circle CI, and more. This helps in verifying the software changes from different angles, thereby ensuring that a better quality software reaches production.

Software enterprises (of today) are walking on a thin rope, as an average quality software product can lead to damaging the brand quality. At the same time, they cannot take the leverage of releasing important product updates at a snail pace.

This is where the combination of test automation and DevOps can play a major role in ensuring the best-quality software reaches the end consumers (or customers). Irrespective of the size of the enterprise, it is important to consult an experienced organization that provides test automation services. This will help in building a fool-proof strategy that incorporates the best of DevOps and test automation.